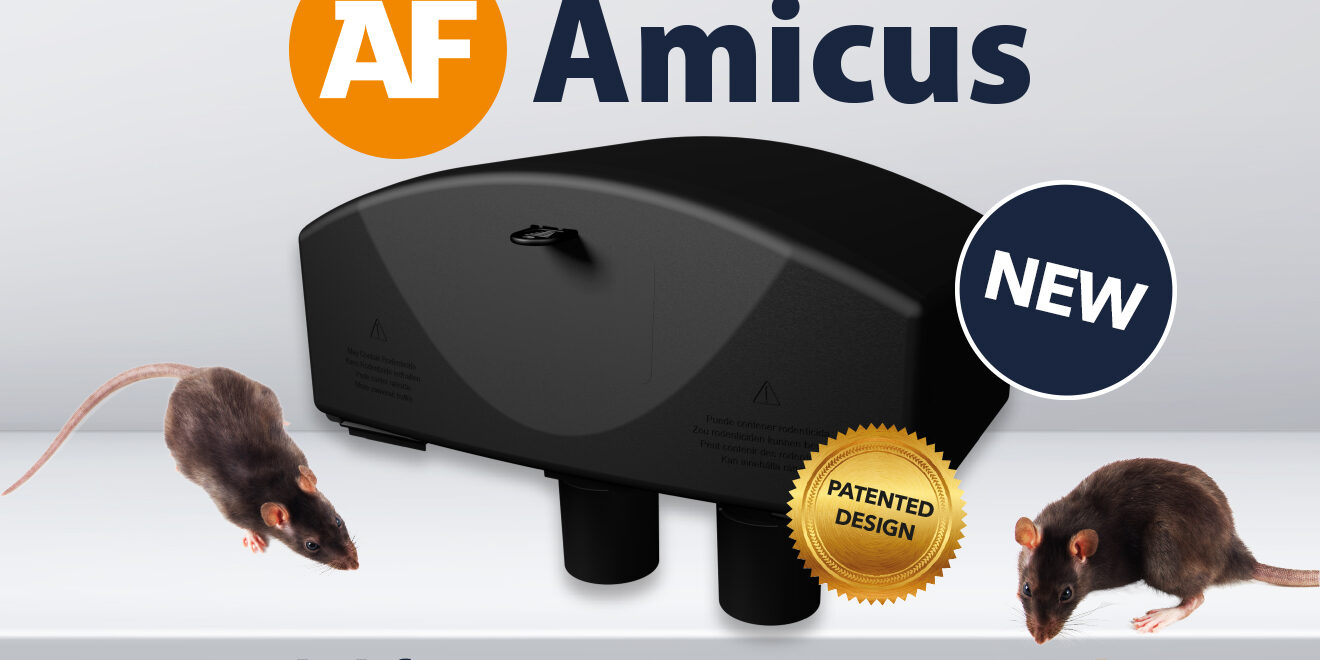 The AF® Amicus is a bait station which precludes entry by bank voles and wood mice, while still allowing access for Norway rats.

A major consideration of an Environmental Risk Assessment, when using rodenticides, is to determine what needs to be done to alleviate the problems caused by rodents at the site most efficiently and with the least risk to non-target animals, such as wildlife (e.g., birds of prey). Furthermore, it is known that some of the anticoagulant rodenticide contamination seen in UK wildlife is the result of non-target small mammals entering bait boxes and feeding on bait. Killgerm have addressed this challenge, faced by rodenticide users, with the launch of the new AF® Amicus.

The AF® Amicus has been designed to prevent non-target species from accessing the rodenticides and traps inside. The new tamper-resistant and species-specific bait station has two ‘tube’ entrances that Norway rats can climb up. Placement at the correct height is critical to allow this and to prohibit entry by wood mice and bank voles.

The unique downward facing tubes naturally attract rats and allow them to climb up into the box, giving access to the rodenticides or traps inside. In testing AF® Amicus was not entered by non-target species such as wood mice and bank voles. Slugs and snails also have not been observed to enter, therefore preventing rodenticide damage.

Iain Urquhart of Advanced Pest Management, who created the AF® Amicus commented, “I knew the design of conventional bait stations allowed for non-target animals to gain access to rodenticide baits. Something had to be done. So, it all started in June 2012 when the expression “rat up a drainpipe” kept on being repeated in my head. It gave me an idea. I doodled with a conventional bait station, bringing it up off the ground, and the idea struck me of placing a pipe up into the box. I drew up some plans and had my brother-in-law make up a box with two tubes suspended from the box. I experimented with the bait station, enlisting the help of a researcher and an independent testing facility, over a period of 4 months. We came up with a design that allowed for rats, of eight weeks of age and above (adults), to gain access to the box but at the same time precluded mice from entry. The fact that no snails managed to gain access to the bait stations, once tested in the field, I have to admit was just an added bonus.”

Accessible to technicians and with a removable door, that also acts as a useful shelf, AF® Amicus will hold many of the usual types of rodenticides and traps while being easily installed with just four screws.

The AF® Amicus can help pest control technicians improve their level of best practice, delivering responsible and effective use of rodenticides, while minimising impacts on non-target wildlife.

For more information about the AF® Amicus, please visit HERE.

Regulating chemicals after Brexit: New rules are here
12 February 2021
Go to Top
We use cookies on our website to give you the most relevant experience by remembering your preferences and repeat visits. By clicking “Accept”, you consent to the use of ALL the cookies.
Cookie settingsACCEPT
Manage consent